The Democrats, under the leadership of Merkel, will bring a "population protection law" through the Bundestag, and this is in accordance with the Enabling Act of 1933.

We are fighting here alone, with a German people that has been brainwashed, yet we have taken up the fight. We kick the democrats out of the state of Mecklenburg-Vorpommern and can start again in the parliamentary monarchy.

For this we have to inform the area in Mecklenburg-Vorpommern with 300.000 newspapers and for this we need your support.

Buy the PDF download of the English VOLLDRAHT edition in the JT-Shop, which is used 100% for newspaper printing.

Thank you very much for your support

of the CDU/CSU and SPD factions

Article 7 of the far-reaching law for the alleged protection of the population, which is to be discussed and passed in the Bundestag in the next few days.
It is supposed to restrict the basic rights mentioned here to protect you from Corona. Does this law therefore go further than the "Enabling Law" (Decree for the Protection of People and State) of the Nazis of 1933?
These basic rights should be restricted:
? the basic rights of freedom of the person!!!
(which means that you may be imprisoned)
? the freedom of assembly!!!
(that means that you are forbidden to demonstrate)
? the freedom of movement
(this means that you may not leave the country or enter other countries)
? the inviolability of the apartment!!!
(which means that people can break into your apartment against your will)
If it is passed, it pours with it the regulations, which were valid so far in a kind of "state of emergency" and were still contestable before court, into laws, which one does not contest then also no more kann‼️

You will recall that the Basic Law is an administrative regulation of the Allies for the administration of the occupied economic areas of the German Reich. This administrative territory was called the Federal Republic of Germany (BRD). And this federation has been dissolved.

As far as the valid and effective legal system is concerned, it is hereby informed that the North German Confederation has never been ratified and therefore cannot be considered a treaty. 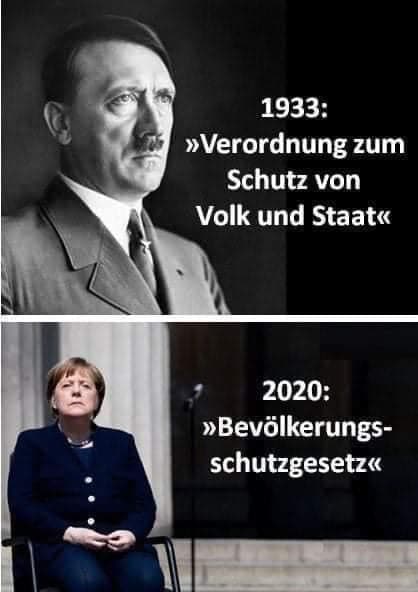 With the 3rd Civil Protection Act of the FRG administration, the Basic Law is suspended.

The FRG administration is in the self-empowerment and acts independently as occupant.

From this it follows in coordination of the occupation rights of the S.H.A.E.F. and the SMAD that the member states of the German Reich can place themselves into the sovereign form of government, if the legal conditions of a legitimate legal succession exist.

Thus all proclamations of Grand Duke Friedrich Maik are valid in the territory of Mecklenburg-Vorpommern.

Special reference is made to:

In the courtesy given to us, we expect a public announcement by the state government of Mecklenburg-Western Pomerania by November 19, 2020, regarding the impending change of government.

This polite request will not be repeated.